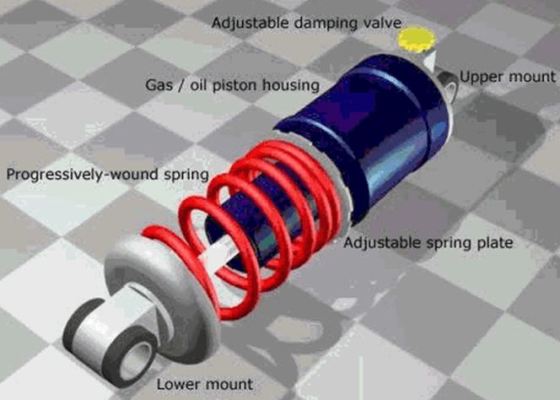 Damping: Damping is the single most critical function of motorcycle suspension which is meant to absorb the movements arising from road undulations & help maintain the control of your bike. Compression damping controls the rate at which the shock compresses while tackling the road undulations whereas rebound damping controls the speed at which the shock opens up after getting compressed. This damping is achieved inside the shock absorber by offering appropriate resistance to the oil flow depending on the speed of the shock absorber. We should not confuse the speed of shock absorber with the running speed of your bike. The shock absorber speed does depend on the running speed of the bike but it also depends on the shape & size of road undulation. This shock absorber speed can be low, medium or high. Low speeds are typically considered from 0 to 0.2 m/s, medium speed from 0.2 to 0.6 m/s & high speed beyond 0.6 m/s. The shock absorber damping force at these low, medium & high speeds need to be very different in order to effectively function & offer the best ride performance whether it’s on road or off road. The typical damping graph is shown below which offers different damping at different damper velocities in rebound & compression.

Adjustment: Rebound as well as compression adjustment has its benefits however in this article we deal with rebound adjustment which is prevalent in adjustable shocks available in market. Every rider feels the need to adjust the damping forces because the best damping is not same for all rider weights. Also the rider needs change in damping according to his riding style & type of terrain. The optimum & accurate damping tuning plays a critical role when it comes to performance motorsports as it affects the lap timings. The correct amount of damping at low, medium & high speeds can make your ride more comfortable during long tour & offer enhanced control. This makes the rider always prefer going for an adjustable damping shocks even if it’s a costly product. But do these adjustable shocks offer the right adjustment to the damping curve? The usual adjustable shock comes with single rebound adjustment which has no separate low speed & high speed damping control. However the word “adjustable” always gives a psychological feeling of an advanced feature which has all advantages over non adjustable shocks.

Limitations: In adjustable damping shock absorbers the rider can adjust the damping using a small screw tool or a knob clockwise or anticlockwise. Here the rider adjusts the setting to his preference by either increasing or decreasing the damping. The rider usually feels that he gets the needed adjustment with this adjustable shocks however any adjustment alters the damping proportionally at all speeds i.e., low, medium & high at same time which is not the ideal situation. Refer below image which shows the change in damping curve with different adjustments.

Better alternative: Another better alternative to adjustable rebound shocks would be a simple nonadjustable shocks which is fully rebuildable & can be modified for a specific low speed damping and a specific high speed damping. This modification is done by changes in the piston valve pack but gives a very precise setting needed by a performance rider. Though this modification can be done only by an expert and is time consuming but this has its merit when it comes to superior performance.